25 Years Since Everything Changed 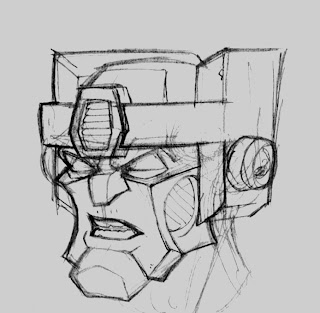 I'm not quite as old as Kup (in my warm-up sketch, above) but today I feel it a little.

Today marks the twenty-fifth anniversary of the debut of Transformers. A quarter of a century ago, #1 of Marvel's limited series featuring the robots in disguise was released. I read of this with great interest - the news item popped up on various Transformers-related internet forums I visit, so it was hard to avoid - but I was about to let it slide without marking it. I'm just too busy to pop in a DVD (or preferably, ex-rental VHS) of the 86 Movie. Nor do I have the time to tinker around with any of my toys, or prise open any of the rapidly-multiplying pile of new, unopened figures I'm accumulating by the day.

And then I realised what I'm so caught up in doing that's preventing me from spending time with my robot chums. All I had to do was take a second and clock what was happening under my nose.

I'm drawing the splash page for an upcoming Transformers comic that I wrote.

The kid who didn't manage to get his own shape-changing toy robot until 1986, but who made and remade Lego effigies of Jazz and Optimus prime, and started spinning his own tales of giant alien robots in blank copybooks, filling them with lovingly-crafted scrawls of Bumblebee and Starscream...that little fella got to do it for real when he grew up.

Except by loving Transformers so much and dedicating himself to telling his own stories about them, and drawing them reflexively; OBSESSIVELY, over and over again, he never had to grow up.

I've said before that Transformers has ruined my life for the better, and it's true. They've been with me through so much, and though not in a conscious way, I've depended on them and been comforted by them many, many times, and not always in the distant past. And knowing the potential for a lifelong connection to a world where nothing is as it seems, it really spins my wheels to think that some kid might pick up something I've been lucky enough to have drawn for Transformers, and want to copy it and draw it for himself. Because that kid was me - is me - and yet now I've been given the keys to the chocolate factory, and have been gifted the chance to tell stories that can "Light Our Darkest Hour."


So it's Happy Anniversary, Transformers. Except now, I'M Transformers too. Until That Day, Til All Are One?

For me, it all ready is.