LAST ISSUE OF THE LAST STAND OF THE WRECKERS 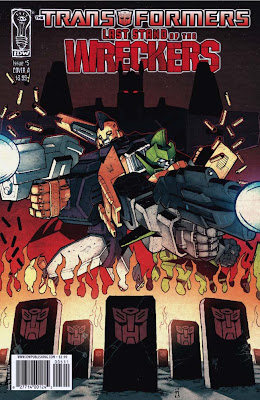 Ready to get Wrecked one last time?

TRANSFORMERS: LAST STAND OF THE WRECKERS #5 punches your comic shop in the bollocks tomorrow, the 19th of May ( it donkey-punches the rest of the world on Thursday 20th) and it marks the end of a truly phenomenal chunk of my professional life. THANK YOU to all those who picked up each issue, supported it, blogged and posted about it, created fan banners and generally made the world Wreckers Aware. The feedback James, Josh (and the wrest of the Wrecking Crew) have received over the last few months has just been tackle-ticklingly terrific. We realise that not everyone that wanted to managed to get on the Wreckers bus, so for those of you who know that something special happened but just didn't manage to get Wrecked-up, the TPB collection of LSOTW hits in August, and all being well (and the planets at IDW Editorial aligning) we'll give you a jam-packed, exclusive-thronged package filled with the 5 issues, plus a ton of supplementary fun. Servos crossed...

So, to accompany the release of #5, let me link you to an interview I did with Sohaib Awan on his EXCELLENT "Fictional Frontiers" pop culture-based radio show/podcast. It was from a while back, so I think I'm still talking up the coming issues, but there might be some stuff you've not heard. Plus, check out some of the other Fictional Frontiers shows on tap there. There's something for every geek. For me talking Wreckers, click here

Also, by now, The first four issues of Wreckers are available on iTunes with the IDW app. And what's more, I'm told that you can get in on the action with yer PSP too.

Go here and press the magic buttons that put the comic I made onto your pocket game box, yeah?

So that's it. On behalf of Andy, Denton, Carlos, Chris, Joana, Waki, Andrew, Guido, Josh, James and myself, thanks for taking this series to your fuel pumps. I don't know if anything I work on will be this well-received again, so I'll enjoy the buzz while it lasts. If you want more, drop a line to the Eds at IDW, or send a note to letters@idwpublishing.com, and hopefully James and I will return very soon. 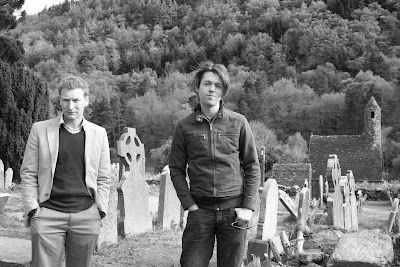 Last Stand of the Wankers. Photo by Whittle

Labels: Last you'll hear of the Last of the Last Stand of them Wreckers
Newer Posts Older Posts Home
Subscribe to: Posts (Atom)