I BELIEVE IN A THING CALLED LUCK, or, THE MAKING OF 'BARBARIAN', THE DARKNESS' NEW MUSIC VIDEO


Hey you - do you remember me?

As is often the way, you can be beavering away on a job in utter secret for so long that it feels weird and a little bit rude when details of it gush all over the place so fervently. That's how it felt this week when The Darkness unveiled their new album campaign only for their record cover to be painted by me and their lead-off single to consist entirely of animated examples of my artwork. I was as surprised as you are.

To go into my love of The Darkness - the whys and hows, of what they represent to me, of the face-aching giddy enjoyment their pop-infused hard rock has given me over the last twelve years - is a blog for another time. (Basically it boils down to their knowing absence of self-consciousness; their rejection of shame and their insistence on being what people don't think they want.) But cut it any way, this job meant a lot. As in, 'Alexander Wept' - A Lot.

What started as me lucking into being their album cover artist when it looked like they had run out of options (last-minute changes in direction had left them in a spin - I made it all a-okay), I happened to contact them and offer my services. The artwork - a rare foray into full colour for me - is seen below, and was the product of very strict guidelines and directions from the band themselves and their carer, an old dear called Phillis.


As the band (MY band; THE Darkness) were chuffed with the result and happy with the turnaround, Phillis asked me to provide the artwork for the video for the pre-album single release, 'BARBARIAN'. It was initially going to be a plain lyric video, but the band's management saw an opportunity to come up with something a bit more eye-catching and clickable. (Nearly 100.000 views in under five days on Youtube!) So, with, like, not much time at all (The fastest and hardest I've worked in many awhile, all while trying to meet day-job deadlines) and resources to match, I set about putting together the artwork that would then be animated by Phillis, who is weirdly adept at After Effects for a septuagenarian.

They needed an image to show the record company first. So, the best bit of the job happened early; getting sent a copy of a new Darkness song ahead of anyone else but the and and their management. I loved it instantly, in a way that I don't always on hearing a new track from them. Basically, it just had a confidence and swagger that they hadn't tapped into for a while. They weren't second-guessing themselves by trying to write what the record-buying public might be looking for. They punched out a riff-heavy gallumpher of a track with obnoxious-levels of histrionics, TWO monologues...and all about the Viking invasion...of East Anglia.

The image I cooked up was this one, of a stylised longboat. Haven't drawn one since primary school history class. It's just as much fun now than it ever was. 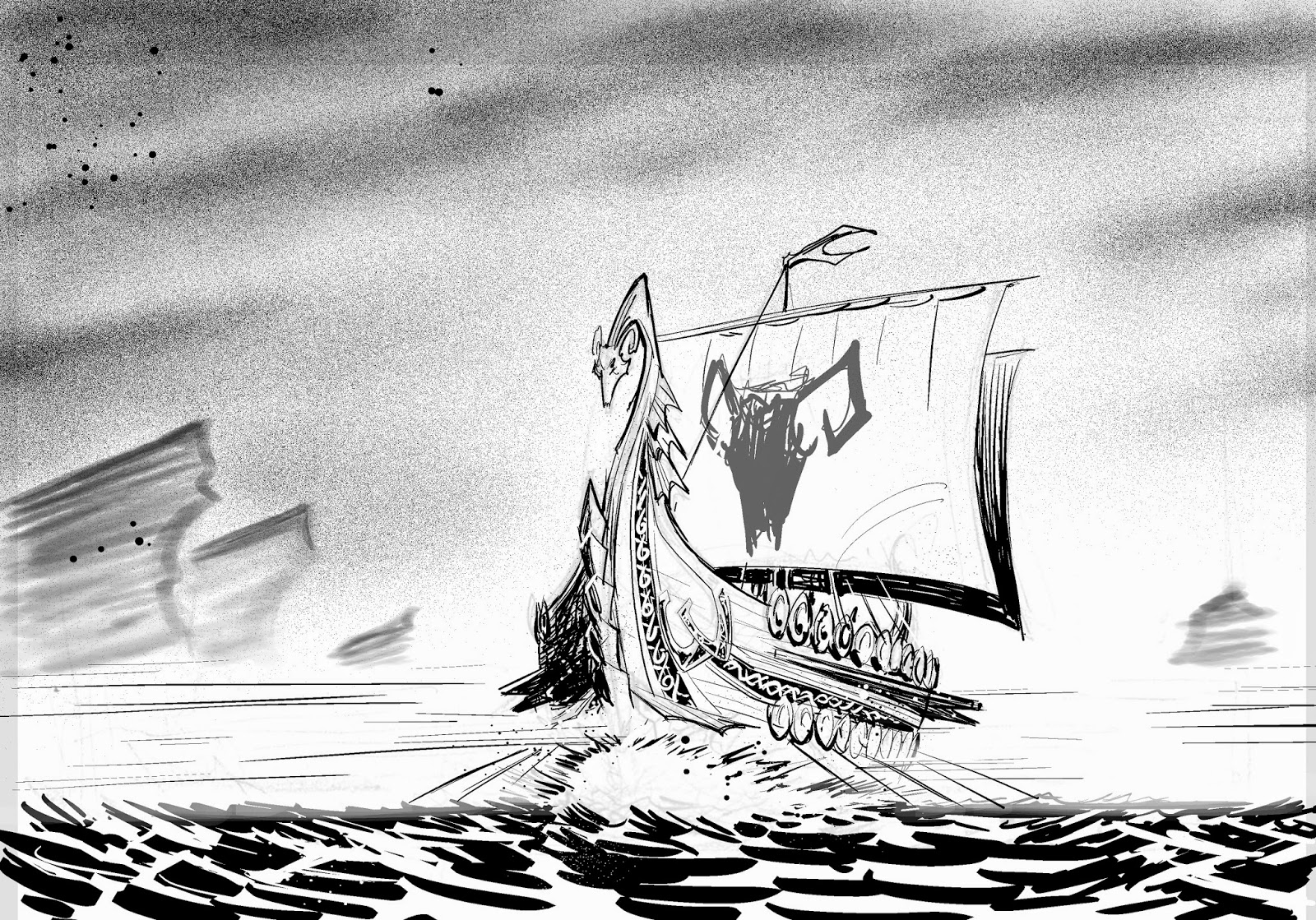 Then, it came time to storyboard it. The content was a relatively even mix of stuff generated by the band's camp, and ideas I had for visual gags and beats. The Sons of Ragnar - 'real' characters from the Norse Sagas were imagined in various different ways. They went from being babies, then to being inverted dark doppelgangers of the band themselves, to being stylised Fantasy creatures; Ivar the Boneless became a sluggy, Jabba-like warrior; Sigurd Snake-In-The-Eye became a reptilian warlord; Bjorn Ironside was decked out in iron, with metal plates attached to his head, and Hvitserk became a billowy white shirt-wearing Byronic assassin.

Yeah, I thought a lot about this. 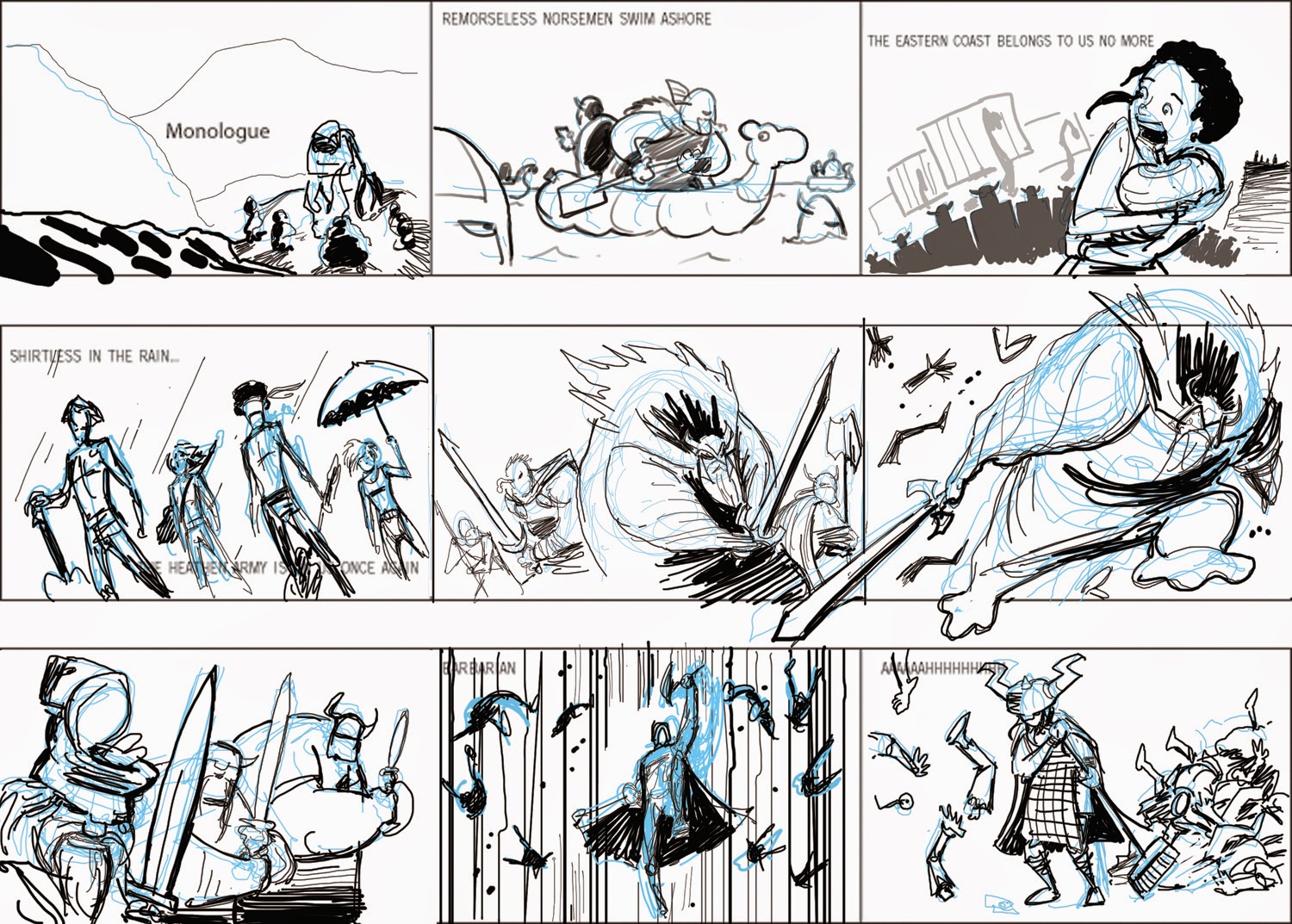 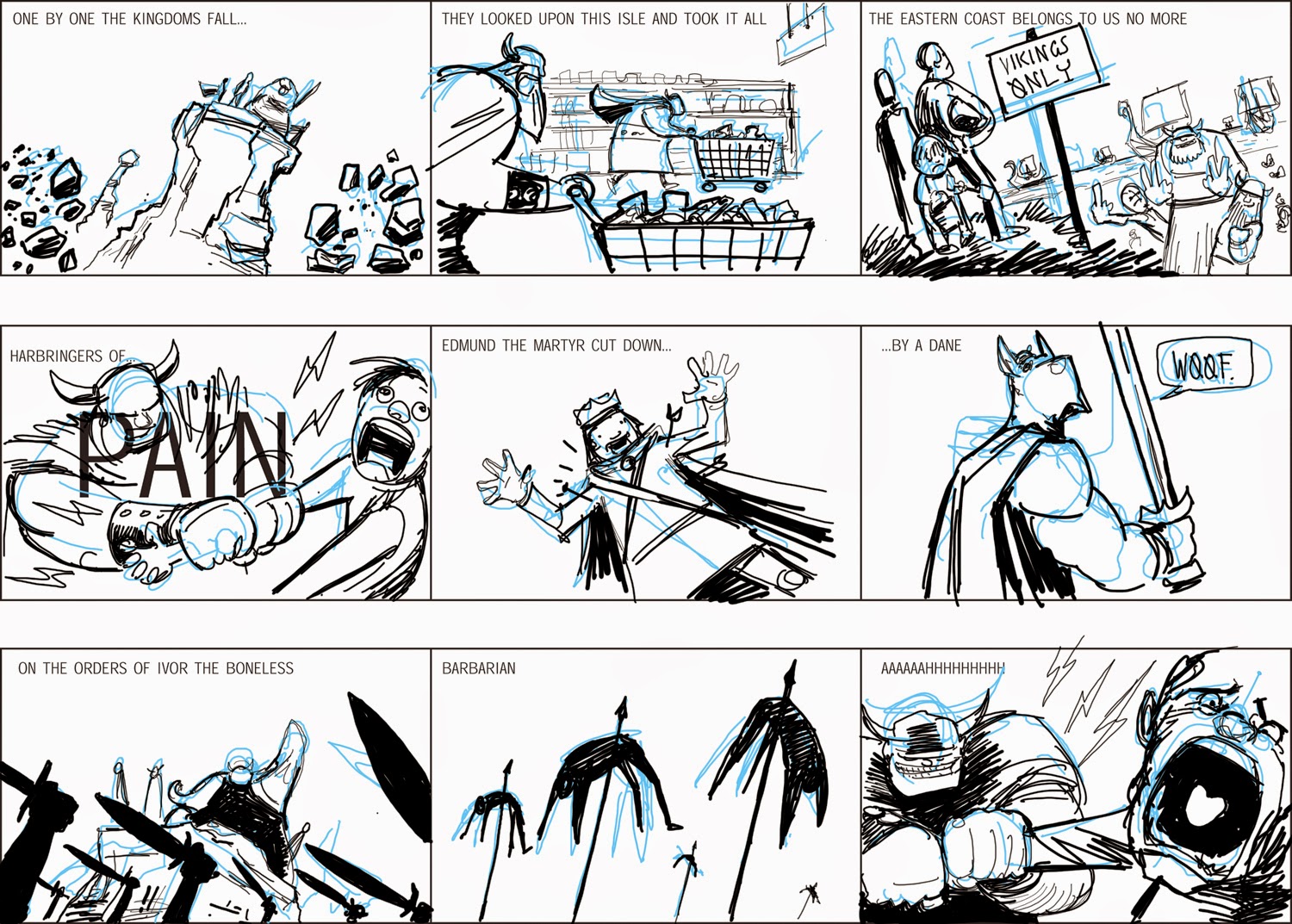 Once most of the boards were agreed upon, we went into production on the finished art. I drew it all at a high resolution - 600dpi - in Manga Studio, with touch-ups in Photoshop. The sharper the image, the better it looks in HD. Or on t-shirts. Or posters.

So, below are some isolated examples of panels from the video. Compare and contrast with these originals versus the wondrous animated counterparts hewn from raw data by Phillis.


Once all these images were fed to Phillis,  I sacked off to get back to work on my day job (MONSTER MOTORS: THE CURSE OF MINIVAN HELSING #1 by Brian Lynch and I is out NEXT WEDNESDAY March 4th! Try the first MONSTER MOTORS here! ) and let her watch a colour wheel go round and round on a screen while the project rendered.

Then cut to last Monday. Billboard. Rolling Stone. The Quietus. Stereogum. All filled with news about the new Darkness song. All heralding the new Album, 'Last Of Our Kind', out on June 1st. All featuring my artwork from the cover. All with an embedded link to the finished video: BARBARIAN

And then the merchandise started to appear. Barbarian T-shirts! Barbarian posters! (and yes, I get a cut, so y'know, clothe yourself. Cover up that patch of dry rot on the wall.) Head to their online store and sort yourselves out.

As with all these things, it's another 'Win' ticked off. There's plenty of chat about me working with them some more, but if this is all we manage together, it's enough for me. They're playing (a sold out) gig in Whelans here in Dublin over a week, so it'll be cool high-five them, and be in the same room as Justin's moustache. It won't be cool when I wig out, fangirl all over them and try and put Justin's moustache in my mouth, but that's how all good relationships come to an end.

Thanks for reading along with this screed. And thanks again to Phillis, who Obi-Wanned me through the whole process. (By that, I mean lied to me to achieve her nefarious end.) She does a great job of looking after the guys and keeping http://thedarkness.co.uk/ ticking over. 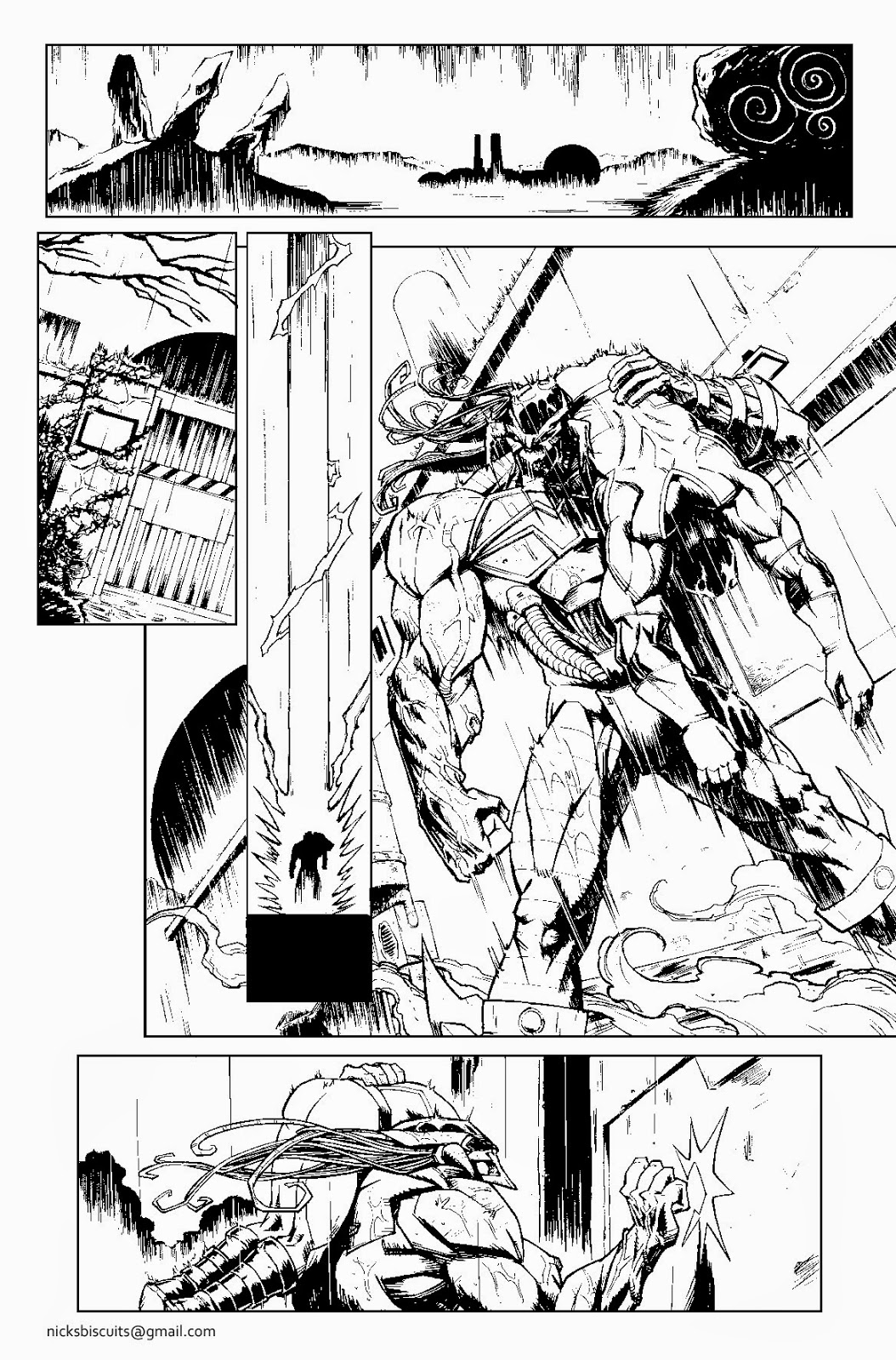 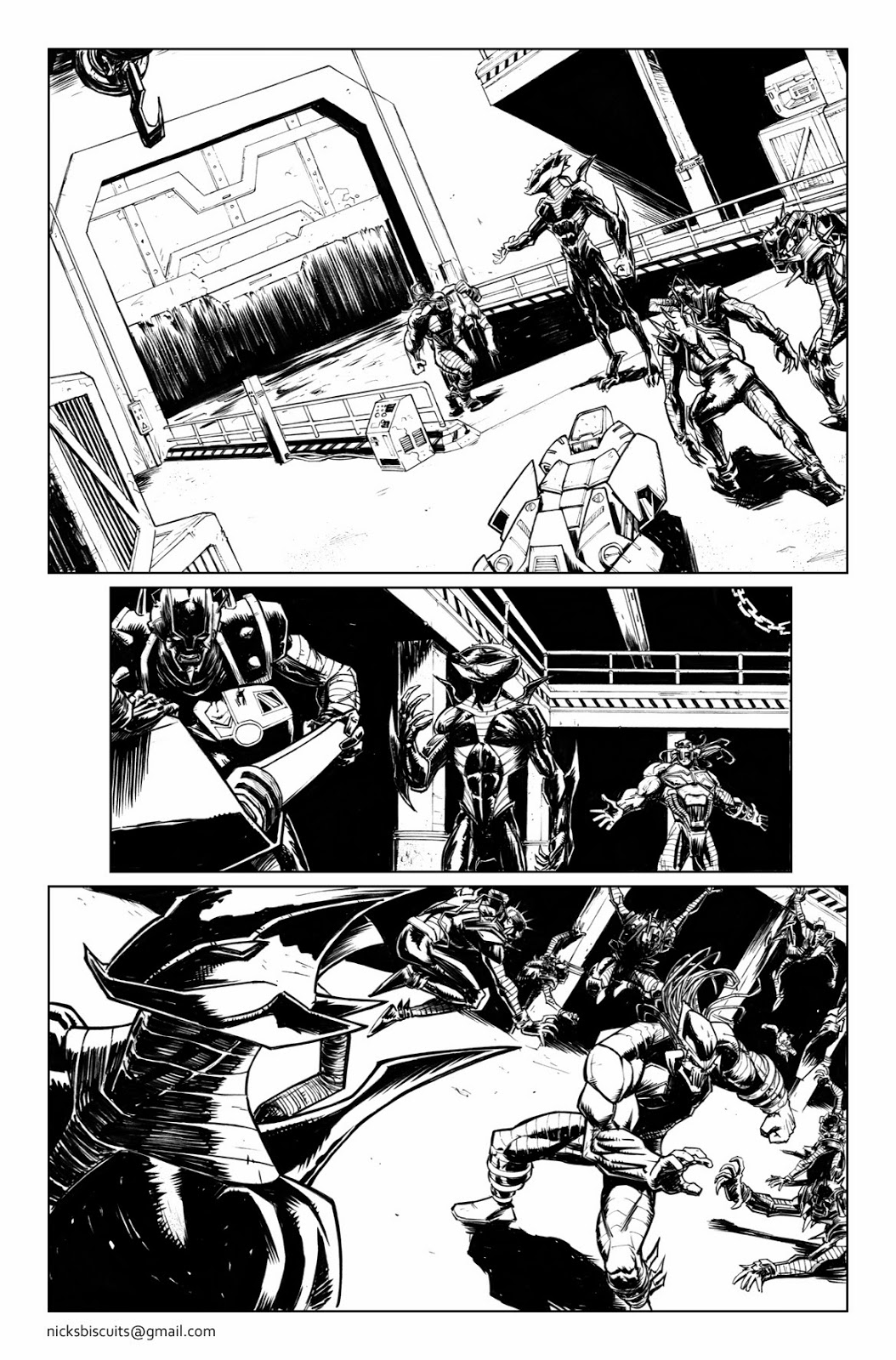 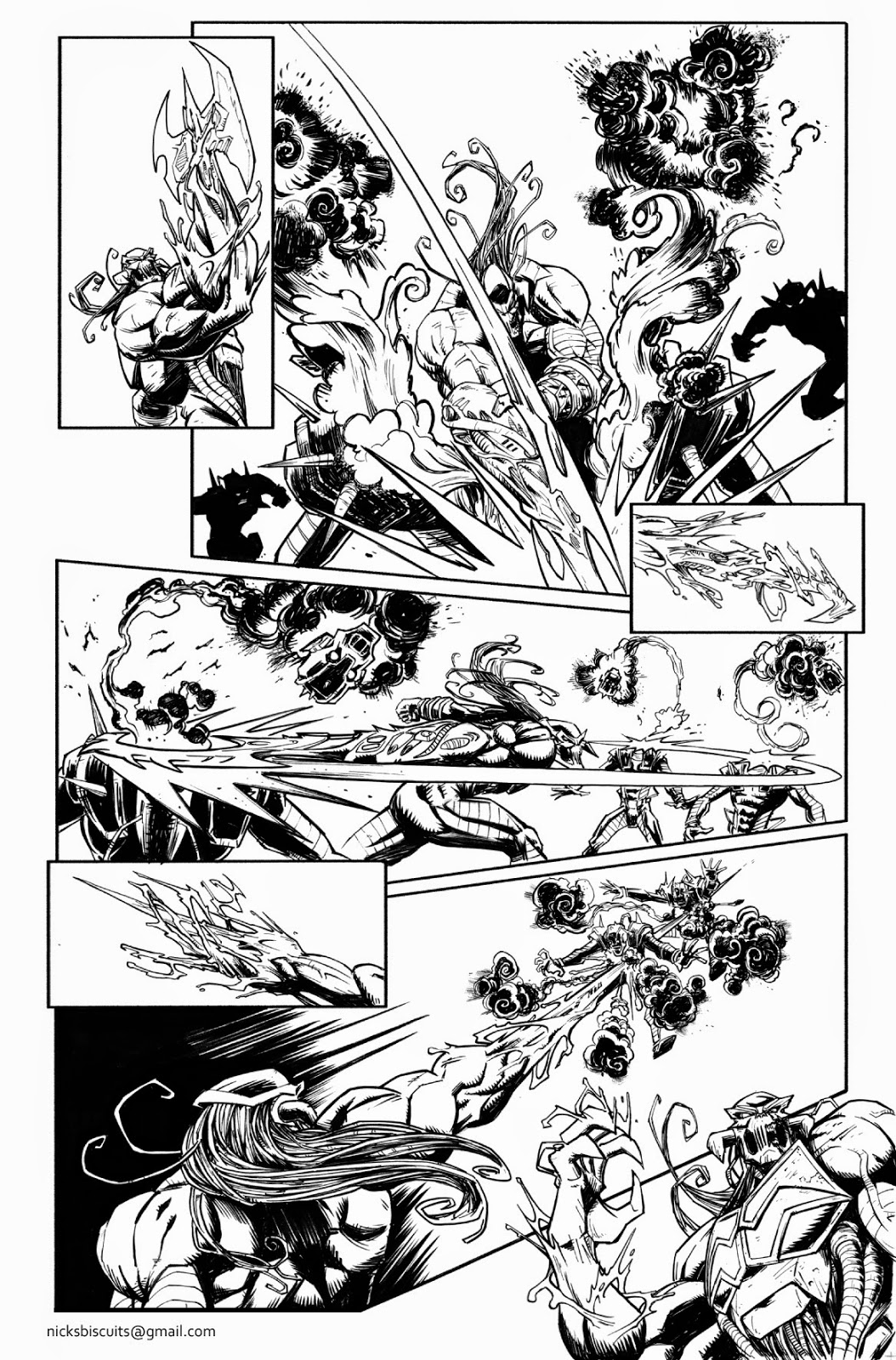 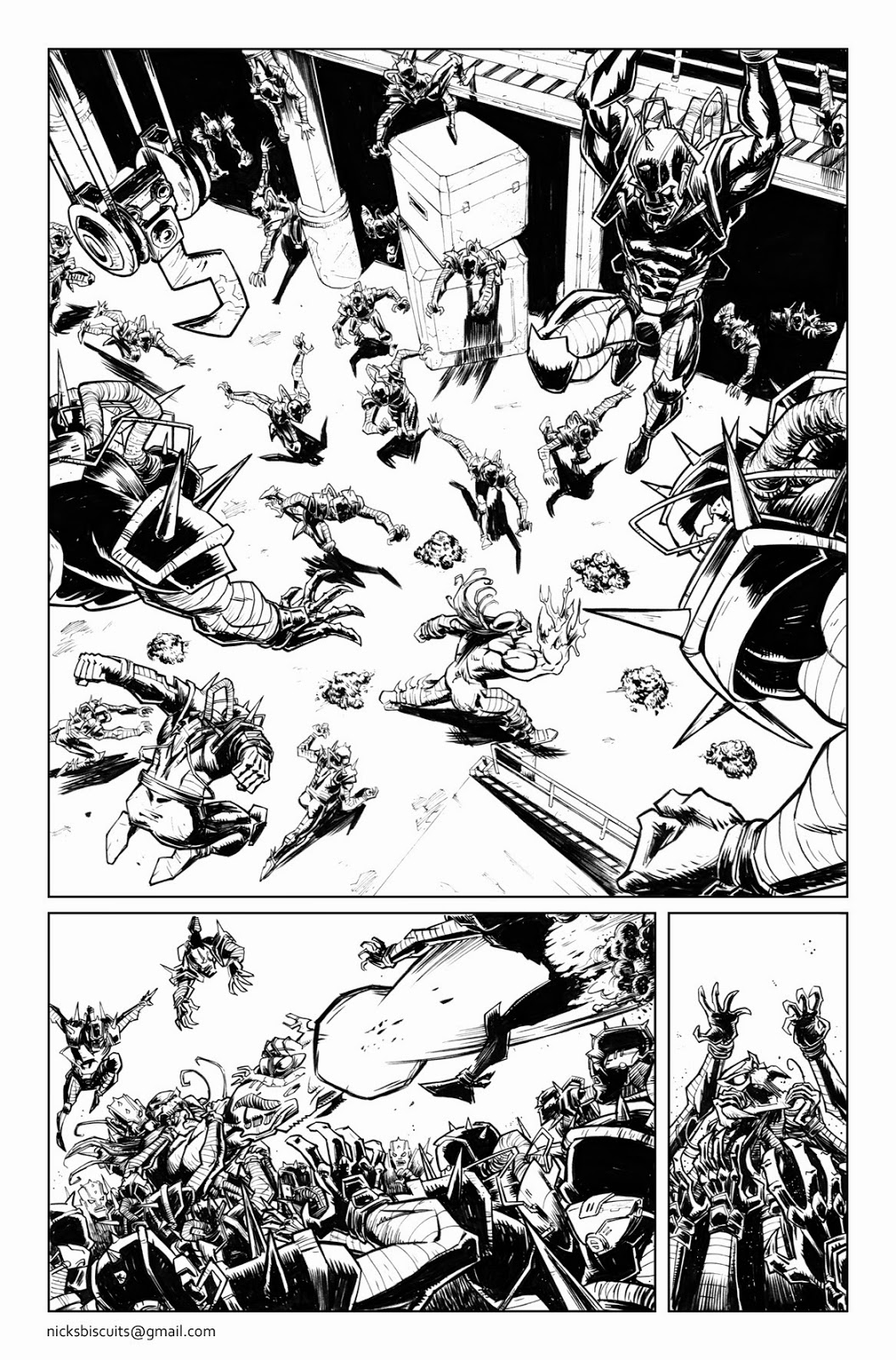 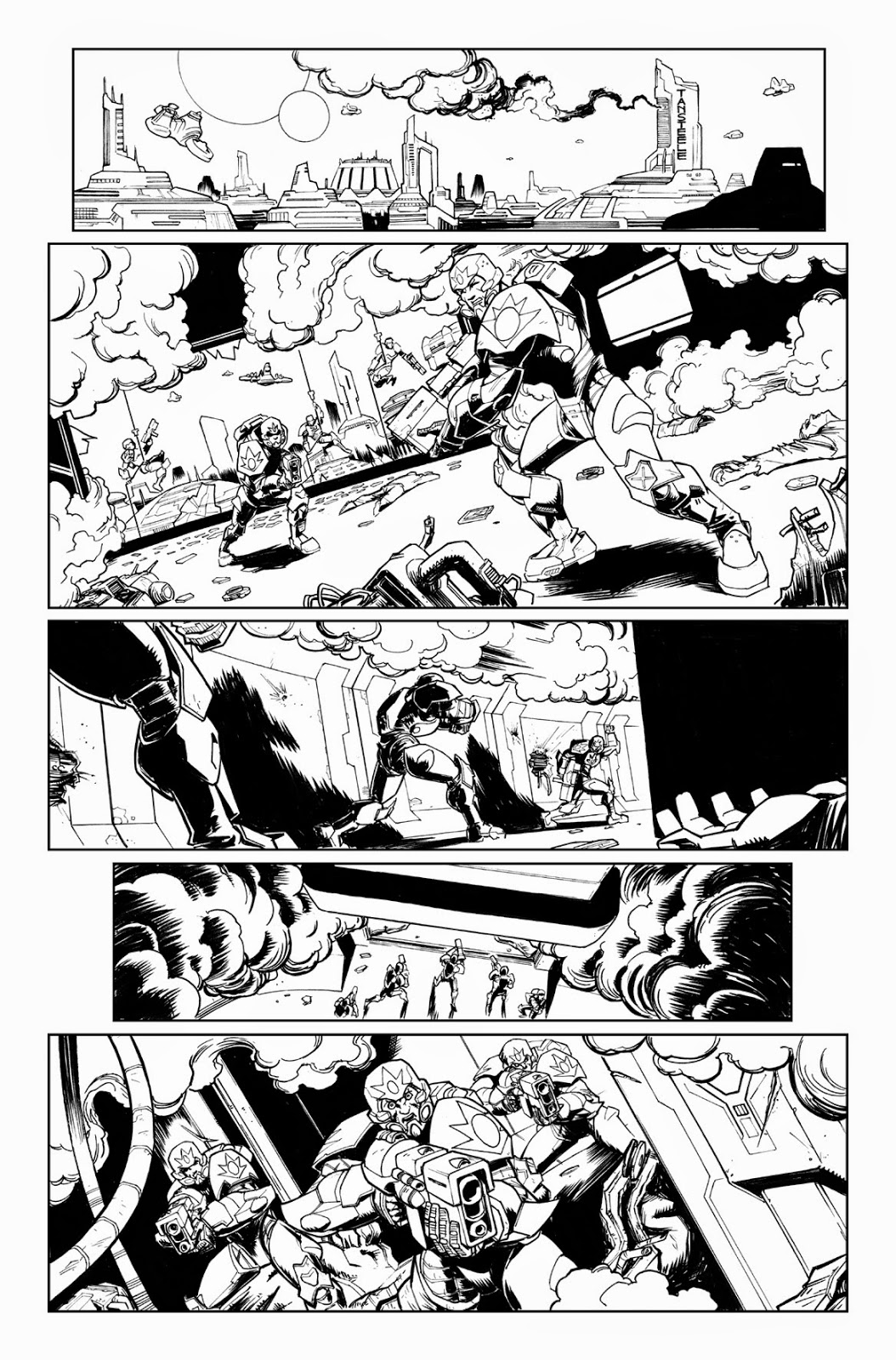 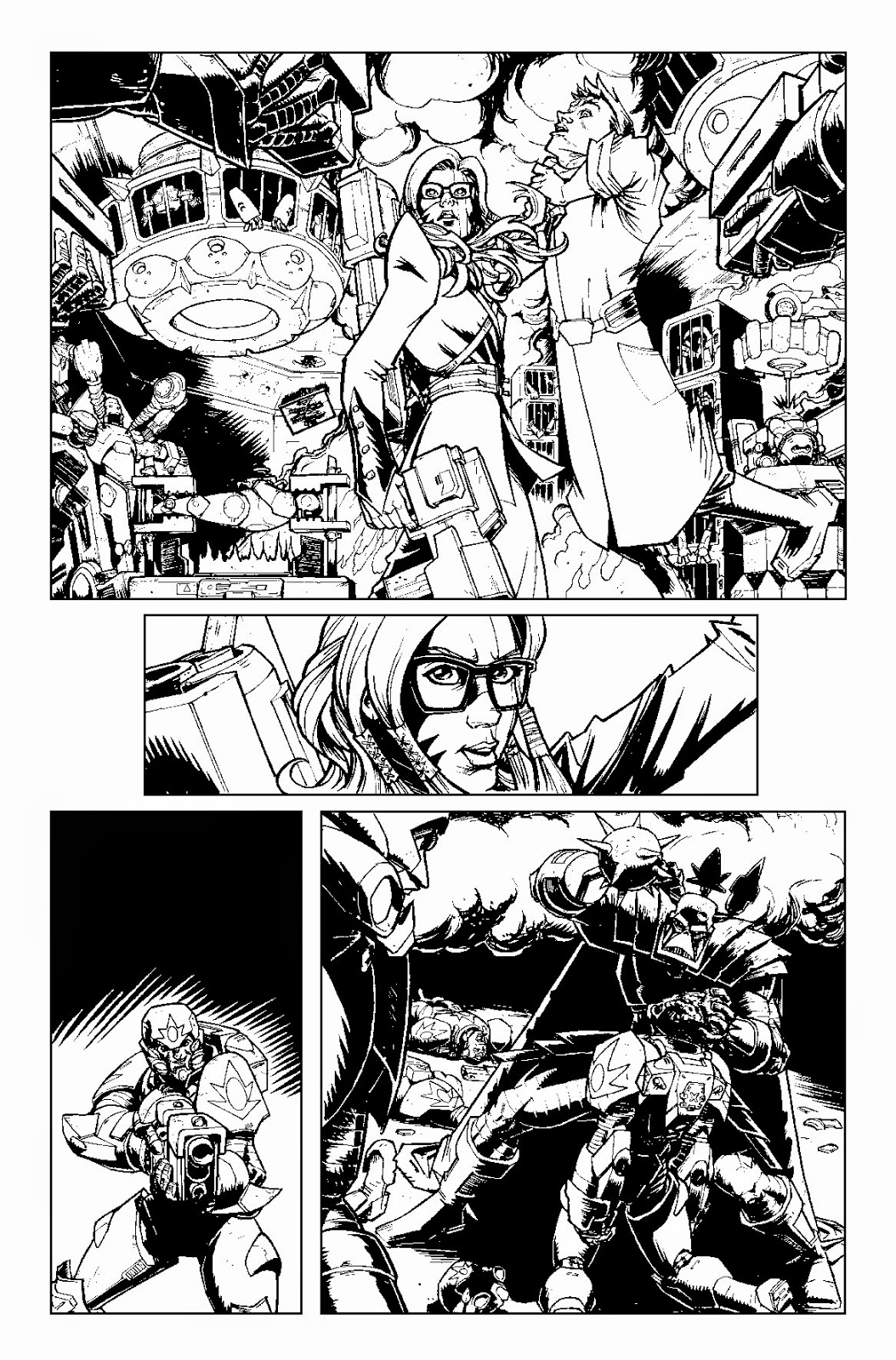 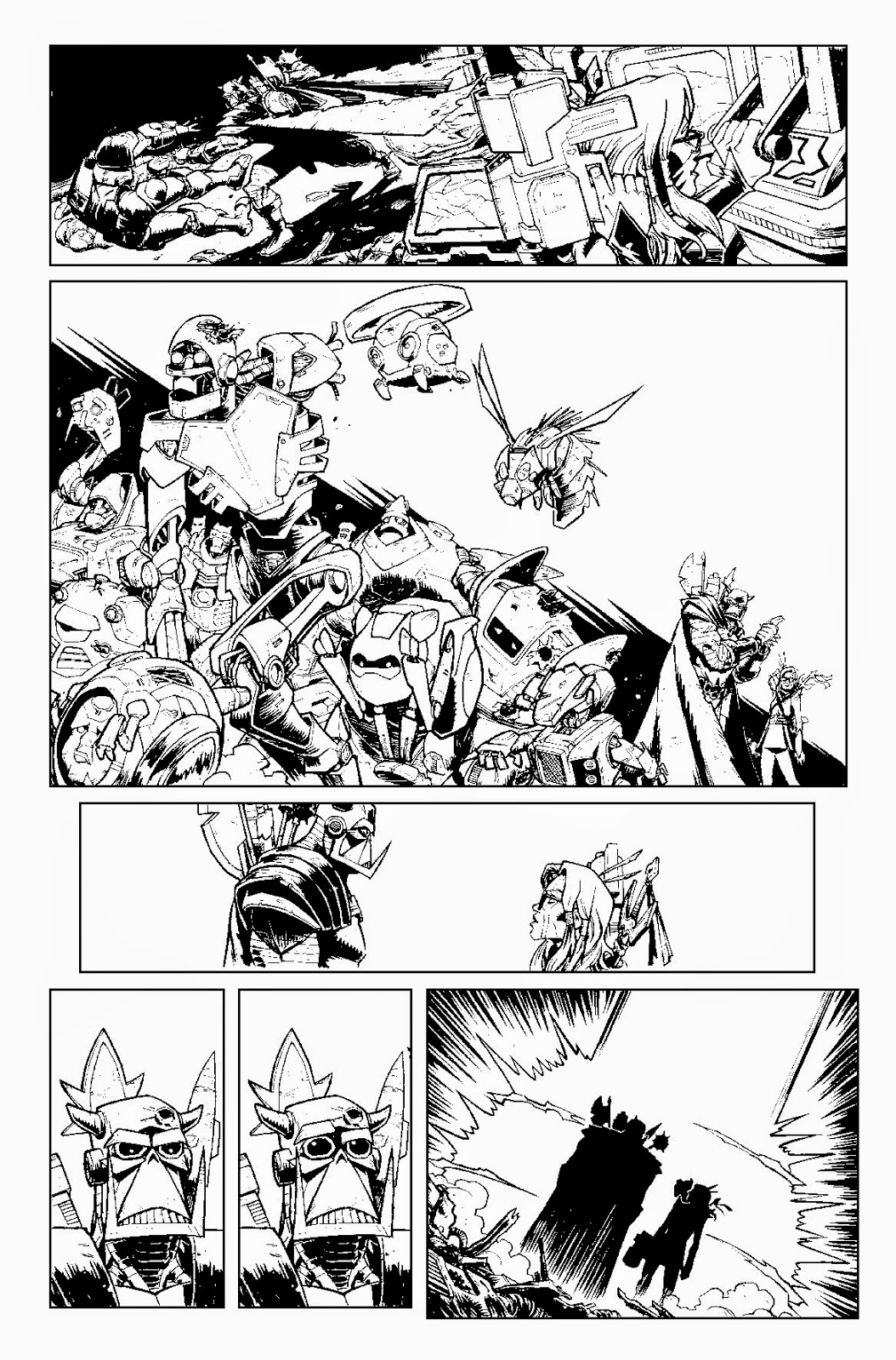