Well, Wrecktums, it's been a dream-like 24 hours. As well as having my first Transformers #1 released since the one I vommed into an exercise book in 1986 (It was a Christmas issue, and featured a giant fan-made Decepticon city garage called Cargantua - I WISH I still had that level of creativity) I was able to share the honour with the fantastic creative of team of Tommy Colourlips (Josh Burcham) and Billy Inkhole (Waki 'John' Wycough) and Guernseyan ubermench, Damien Sparkes' best mate, James Roberts. James has wanted to have a crack at TFs pretty much as long as I have, and rightly so: He am a best. Add to this the viral internet psychosis which has given us all the thumbs up our apertures could handle, then things couldn't get much better. But I like to push my luck.

So I headed down to Forbidden Planet Dublin, where the wonderful Kevin who operates the Palace of Pulp (and assorted TV/film merchandise) has kindly agreed to run a massive Wreckers promo. Firstly, he led me behind his gaping wizard's curtain to sign all the copies of Last Stand of the Wreckers in the shop. 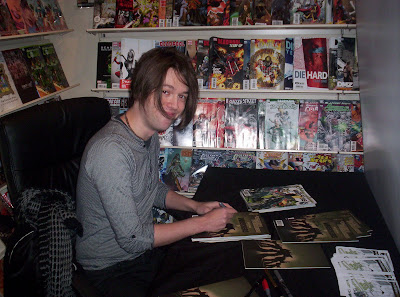 And man, are there a lot of copies! Kevin kindly expanded his order to accommodate the big demand there seems to be for this series. So this was a huge deal for me personally. When I was 15 (and as we all know, that's the age when we're all borderline special needs, and 100% deluded) I self-published a comic called Captain Ireland (BIG step down from Cargantua, right ladies?)and persuaded the lovely FP people to stock my little photocopied nonsense. And since then, I've always associated getting the thumbs up from the city's biggest comic shop with 'making it' somehow. So it really was a special moment to sit silently with the comic I've given WAAAY too much of my life to, with my best girl Whittle beside me, and enjoy defacing every copy of Wreckers in the shop. Basically, if you buy your copy from Forbidden Planet, it's got traces of my DNA on it whether you want it or not. One copy in particular will actually make you pregnant. So the hunt is on!

A slightly more desirable offer is the one I mentioned in my previous post(below): Buy a copy of Last Stand from FP, and you'll enter into a draw to win an original Springer sketch. To push this aspect of the event, the crew in The Planet have controversially eschewed their sacred alphabetical order scheme and place Wreckers at eye-level! Van der Valk! 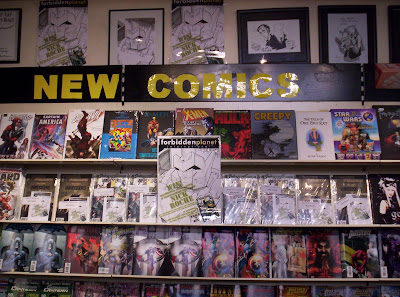 They've placed the framed drawing on display and everything, having to remove a Tommy Lee Edwards and Cameron Stewart sketch to accommodate the robotic awesomeness! Swivel, TLE! Spin on it, Stewart-o!

And there's evidence of my whorish nature in the front window of that most Forbidden of Planets. Look at 'im! Springer wants so badly to shove Hal Jordon's ring right on his finger! 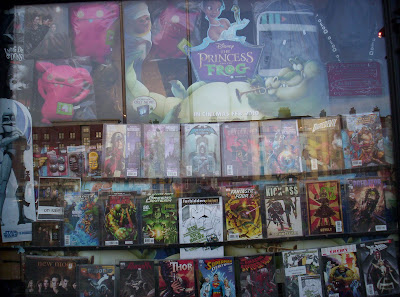 Essentially what I'm saying is, no matter where you are in the country (Ireland that is), Forbidden Planet will look after you on The Wreckers front. And I've had good word that sales are brisk, m'fwends. So contact 'em, and be in witha chance to get a free drawing outta me. They do mail orders too, so no excuses. Correct?

On the subject of sales, reports all over say that this book has legs, with a couple of establishments in the UK down to their last couple of copies. Which is bonkers. So, y'know, I'm grateful for the attention, just like a dope-fiend cheerleader with daddy-issues. And I'll be soo nice to you...

Just wanted to steal some artwork off some addled-gentlemen who live on the internet. First of all, the pornographically talented Trever Hitchinson, who does variant covers on Wreckers, and is probably responsible for 78% of the sales so far, has made a Photoshop document of the Wreckers logo available for folk to create their own LSotW banners, artwork, promo-tugs or t-shirts. It looks like this: 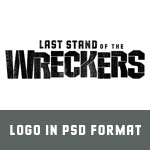 And is available here: trevhutch.deviantart.com/journal

This is the best thing Shaun Knowler has ever done: 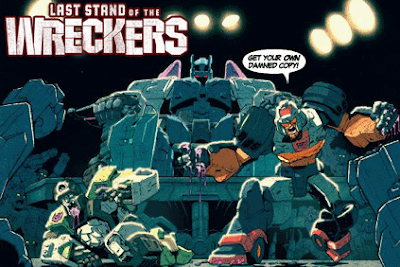 And this heartfelt treat from the brazenly-gifted Matthew C Adams: 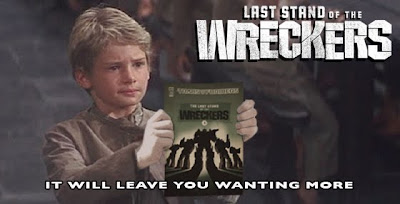 I confess that without knowing this next one is something I've wanted to see for a LONG time. It comes from Kup Kollaborator Kris Karter. The man's barely human, but all-genius:

And is this the first LSotW-based fanfiction? I tell the now that it is canon, and nothing will ever be done to contradict that. From the home of...just horrible jokes like this one, Andy Turnbull must surely apologise for this:

That's it; Feel free to send comments and crits and cwestions here. Buy Last Stand of the Wreckers at Forbidden Planet Dublin if you can, DEFINITELY go to eclecticmicks.com where they're all fucking showing me up at my own game and listen to me browbeat you more at thecomiccast.com.

I will never top that page 22 again in my career...

Do Ya Wanna Get Wrecked...?

IT'S A DIRTY JOB BUT SOMEONE'S GOTTA DO IT

So here it is, the run-up to the brain-flayingly anticipated launch of LAST STAND OF THE WRECKERS, my reason for living for the last six months, as well as my reason for almost expiring, and DEFINITELY my reason for not spending time here. But where to start? Hmmm? You wanna win an original sketch of Springer by me? 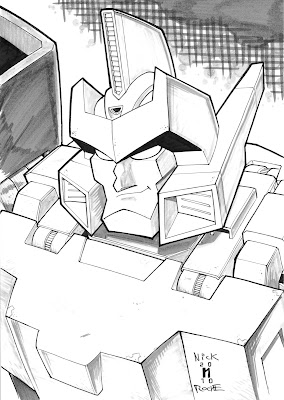 Course ya do. Then buy a copy of Last Stand of The Wreckers #1 at Forbidden Planet Dublin. Every copy bought enters you into a raffle to win this grey-tone pic of ol' Springybits himself. Poster below: 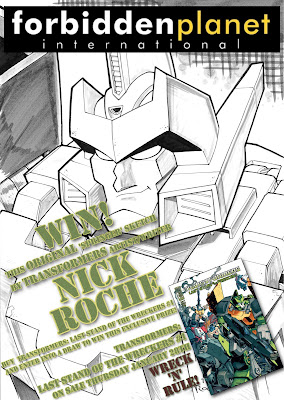 I'm gonna sneak into the good 'ol FP on delivery day and scrawl a signature on each and every copy, so for signed comics, you know where to go kids! And a big thanks to Kevin and Jay at Forbidden Planet for wrangling this.

'COS WE'RE OUT TO SAVE THE WORLD - YEAH!

The Eclectic Micks are a bunch of Irish comic book artists who run a daily sketchblog. But all this week, the site has been transformed (I wonder if anyone will get that...?) to ECLECTIC WRECKS! Yep, each day, instead of crafting career-enchancing chances to make it big in the comics industry, the boys on the blog are sullying themselves by drawing a Wrecker A DAY! First up is Stephen 'Angel/The A-Team' Mooney with his sweet as a well-meaned love-thrust colour sketch of that Springer guy. Go to eclecticmicks.blogspot.com for a daily dose of damn fine drawings, and please leave a comment. The guys are going above and beyond drawing these guys for me, so send 'em your love. And tomorrow on the blog, 28 Days Later artist Declan Shalvey draws Kup. I wonder what possible overlap there could be there...

ABOUT THE WARS YOU'RE FIGHTING - GEE, THAT LOOKS LIKE FUN!

Done with reading about me talking about Wreckers? Well as of tomorrow evening, The Comic Cast (thecomiccast.com) will have a podcast available for you, your ears, and whatver other bits of the anatomy you feel I'd fit snugly into. Liam from the CC had a chat with me last week, so come and listen to what I have to say. Followed by buying my comic. Did I say that that's important? 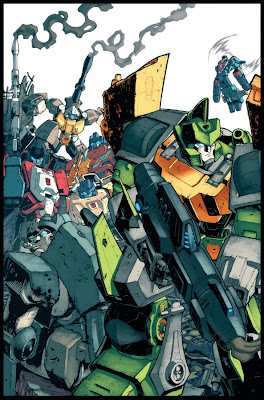 A text interview is also available at the wonderful Transformers Ireland Online site, specifically at http://tfio.proboards.com/index.cgi?action=display&board=staffaves&thread=716&page=1. Sign up, log in and say hi. It's a very informal and fun place to talk ro-bollocks with like-minded fools.

YEAH, YOU BET WE CARE A LOT

And I need to take a second to thank the Wrecking Crew: James Roberts, my co-writer and Duocon partner; Josh 'Josh' Burcham, colour ninja and heart of the Wreckers; and John 'Waki' Wycough, ink fiend who's helping out on a very tough gig. And Denton, Andy and Carlos, our editors deserve a mighty mention for pulling this thing together.

So folks, go make Last Stand of The Wreckers a success. We've seen the hype online, and we've listened to what everyone has to say. This is a book for Transformers fans BY Transformers fans. I know that not everyone has stuck around at the IDW party over recent times, but good golly: big, honking robots in a story about a space prison-break? You can surely give this a twirl! This is the rigid filling for your empty holes, Transpeople! It's dark, it's scary, it's funny, it's tragic, and #1 features at least one decapitation!

That not all? God, you're like my mother. Alright then: every issue (bar #2 - oops!) contains EXCLUSIVE supplementary material that will NOT be reprinted in the trade paperback collection - there'll be all-new extra material for that. So for background goodies put together by James, Josh and myself, the monthly Wreckers series is the only place to be.

IT'S A DIRTY SONG BUT SOMEONE'S GOTTA SING IT NOW

Theme to 'Last Stand of The Wreckers'. Says everything the characters and creators want to say.

First of all, an update on the commissions and prints situation: Yikes. I believe I mailed most of you last year updating you on my personal circumstances, but if not, mucho sorries. The bottom line is, I'm still up for (and actually looking forward to doing these commissions if you can wait past March. Yes, I realise that's a ridiculous length of time to hang on for a measly robo-drawing or print. So with that, anyone looking for a money-back refundio, holler, and I will also make that so. And everyone who's waiting, wants to wait, or is ready for the refund, gets a free, humble, total and utter apology for the delay. I won't be offering commissions again after this misstep, I fear.

Okay, stick with the blog, kids. It's about to get Wrecked...