LAST STAND OF THE WRECKERS #3 OUT THIS WEEK 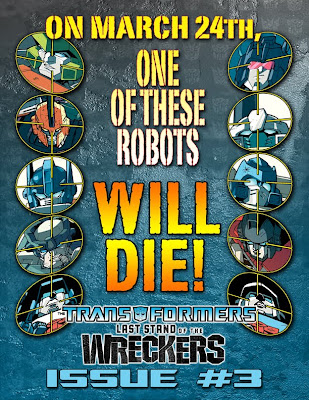 HUGE thanks to the super-talented, and uber-hunky Chris Mowry for putting this poster together for us.

Last Stand of The Wreckers #3 is released March 24th in North America and on the 25th everywhere else. And if you missed the first two issues...

Graham Thomson of The Hub (http://www.the-hub.co.uk/) puts it better than I ever could:

"The first two issues of the critically-acclaimed IDW mini-series "Transformers: The Last Stand of the Wreckers" by James Roberts and Nick Roche are now available to download to your iPhone/iPod/iPad* for just £1.19 per issue!

You can download the IDW Transformers Comics app for free via iTunes http://itunes.apple.com/gb/app/transformers-comics/id335638555?mt=8 and from there buy/download individual issues directly to your device.

And you can even take screen captures of any page/panel for use as wallpaper on your device. Just imagine looking at a screen of beautiful Nick Roche artwork every time someone sends you a message, Facebook update or Tweet!

£1.19 really is exceptional value for a RochertsTM product. Other Transformers comics are available via the App for the same price, but clearly aren't as good value.

So, if you have an iPhone/iPod/iPad* or are a pirate with an iPatch, then do your bit today to support James and Nick and cement a long and utopian future of RochertsTM Transformers comics for our children, their children, and their licensed bio-engineered offspring!

Labels: Download Last Stand of the Wreckers or I Will Kill Your Family Before Your Very Eyes

Stand fast, Wrecktums. And thanks for maintaining optimum vigilance in my absence. I never stopped being Wreckers aware; it's just the Wreckers I was aware of were the ones that still needed to be drawn in #5. (A part of me dies with every death I must draw...)

So here's a round-up:

More robot dreams (electric sheep optional) coming true as the Transformers Wiwi site Wrecked itself, like, right up. Click here to see how those wonderful folk Wreckerised the logo and slapped in their entry on those Wrecker guys as there featured article for the duration of WAW. Guys, I dunno which of you wonderful motherfolkers are responsible, but mahoosive thanks. Seriously.

ANOTHER site has roofied this half-assed idea, toaken it home, done unspeakable things to it, and taken polaroids. High fives and over-egged ass-grabs at TFormers.com. They've thrown up a nice hoo-rah call to arms to whip all the uneducated into a lather. They're also responsible for THE innovation of the 21st century, the movement to Wreck A Friend (WAF. Wonderful, wonderful stuff outta those guys. Get on it!

ME TUBES ARE WRECKED

WAW has even infiltrated Youtube! Infamy at last! They don't let just anyone on there, y'know?

A wonderful chap I only know as Peaugh (but who writes for Fangoria Comics) up-chucked a great video of him saying nice (like, RIDICULOUSLY nice) things about Last Stand of The Wreckers. Thanks so, so much man, that's really cool to hear. What's even coler, is that he came across LSotW inkbot, John 'Waki' Wycough (Where, we're unsure. His house? The changing room in the local swimming baths?) and grabbed some incredible pieces of original inked Last Stand artwork for himself. He has my two favourite pages in the whole series in his collection now. Swine. He also managed to grab the page from #1 with the first appearance of the now universally beloved Wrookies. So click til ya can't!

Our Antipodean friends (Yes, we're friends now) are doing their bit here, generally being smug with their masses of Wrecker toy photos. All iterations of Wrecker are accounted for, and it's enjealousing to see all those toys from yesteryear that you'll never own. Well, not for me. I have them all.

LAST STAND OF THE RUSTING CARCASS

And lastly in our round up, here's a...mental website which I'm glad is on our side! Carcass is the man in charge, and his sit features a very Impactful piece of art from the glorious Marcelo Matere. Gotta be worth the trip for that, kids?

And that's it for now! Remember the point of it all: Last Stand of The Wreckers #2 is out pretty much everywhere, except where it isn't - and it'll be out there tomorrow. Or the next day. Just don't give up! You can track it down if you Dare!

But I love YOU.

Don't be Wary: Be Aware.