Wotcha, pickle-knickers! Like a digi-ninja or thrush flare-up, I arrive when least expected, scattering your tawdry lives tho the wind like matchwood.

Where've I been, I sense you asking? Ask your collective mums. However, I will tell thee THIS: I have been dividing my time between knocking out a short story for the upcoming Transformers: All Hail Megatron #15, - due out in this li'l Christian's spawnmonth, September - visiting Amerika and being embroiled in a mass love-in at BotCon with the cream of IDW's output, and languishing around the walls of Derry at an ace grassroots Comics festival, full of passion, pride and creativity, until I arrived reeking of opportunism and mercenary values.

Should I have told you all about these little jaunts earlier? Maybe even before they happened, ensuring maximum attendance? Of course I should. But if you lot didn't love the shuddering vinegar strokes of crashing disappoint that is my trademark, you wouldn't be here.

So the AHM piece is done and dusted, and its turdlike qualities are being polished by the colourist on Spotlight: Hardhead, Kris Carter. (Not really a spoiler but more bragging rights: there's a page in this story that features Optimus Prime, Ratchet, Prowl, Jazz, Hound, Hot Rod, Springer, Grimlock, Megatron, Starscream, Soundwave, Scorponok, Thunderwing, and Bludgeon. Oh, and Kup. If my friends could see me now!) I'm muy muy nervous about the little tale, as it will delineate clearly whether or not my self-scripted Spotlight: Kup was a massive fluke. Though IDW seem to err toward me having a dew-drop of potential, as it's been leaked that I'm to write and draw an entire mini-series featuring an as-yet undisclosed slesction of transforming robots. People seem keen so far on the idea, but the pressure to not suck shit through the oesophagus of a recently-deceased hamster is upon me.

BotCon was immense. Too many high points to mention, but being Touched by Stan, smiled at in a minor chord by Vince D, charmed by Gregg Berger (Who said "Me Grimlock Pissed Off!" in THAT voice!) impressed at the normal-sized chin of Gerrick Jenius Wyatt, and given a Cribs-style trip to the home of David Kaye (Voice of Optimus Prime and Megatron, depending on his mood) were pretty priceless. But it was hanging with IDW brass - like my editors Denton Tipton, Andy Schmidt and superstar clunge-summoner Chris Ryall, fellow wrobot writers Mike Costa and Chris Mowry (and his diligent carer, Erin) - and the phalanx of freakishly talented feckers like Josh Burcham, Casey Coller, Andrew Griffith, Shawn Knowler, Joana Lafuente, Marcelo Matere (who hung out with GUILLERMO DEL EFFING TORO at the 'Con, but thought it was Robert Rodriguez!)Robby Musso Evil Jenius Su and Josh Van Reyk (not to mention new BFFs Matt, Alejandro and Martin) which made the trip so totally Drift. 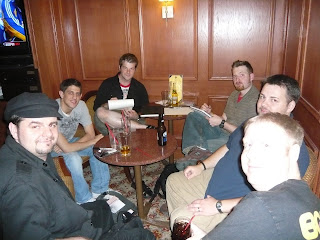 I also took the time while all the way over on the West Coast to pop down and see where all my seven-figure cheques are written down at IDW HQ. And did a dirty protest on Ryall's Mac. Good times! 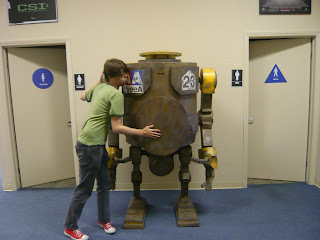 Thirty Six hours after flying back from the States, I had to head on to Derry for the 2D festival. I went as a vital component of the Travelling Wilburys of the Irish comic scene, The Eclectic Micks. (Seriously peeps, check out eclecticmicks.blogspot.com, but only on Sundays. It's proof that I'm still alive.)Mick Mooney, Mick Shalvey and Mick Sliner came with, and we had a splendid time, sketching for nippers and nerds alike for five hours straight. David Campbell, the show's organiser, should be all proud of himself and stuff, innit. There was actual talent on display there too, including comics legends Bryan Talbot (wotta gent!), David Lloyd, D'Israeli and Glenn Fabry, as well as some of my childhood icons Mike Collins, Will Simpson and Liam Sharp. (Liam signed a very tender dedication to me in the front page of his debut novel, God Killers. Which leads me to believe that he wasn't absolutely smashed last November when I gave him a little kiss on the neck.) There was also some fresh talent on the turn in Derry; I was sat next to a little guy called Simeon Freeman, I think. 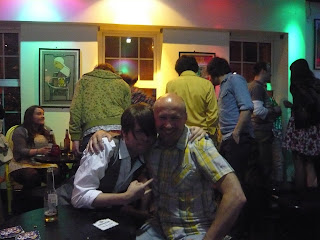 The scamp likes writing about robots too and was shilling a very professional-looking book called Rad Robots, which I think he made without his mum helping him. Either way, I signed a coupla things for him, and obliged when he asked me to draw some stuff for him. (Cheeky bugger asked me to draw 5 issues of a story he's cobbled together about robot dinosaurs. I said I'll do 4, and he accepted it manfully.) 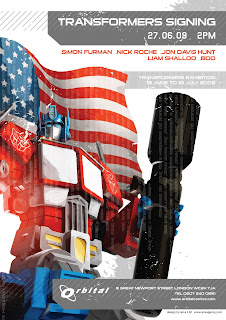 Which leads me to the now; the present, that what-is rather than the whatnots. People, I bid thee to get to London town and behold an exhibit of my drawings. I'm sharing wallspace with The Boo and Jon Davis Hunt - two very different but very talented TF artists - in Orbital Comics and Collectibles on Great Newport Street as of last Friday and until the 19th of July. (Check the flyer posted hereabouts and orbitalcomics.com) I've got about fifteen pieces up, so head along and check it out. However, this Saturday, June 27th, I'll be joining Boo, Jon, my colouring chum Liam Shalloo and the Man Without Fur, Simon Furman at a signing from 2pm until 5pm. Hopefully the sun won't keep too many of you away, but please come down and say hi. I'll be flogging some Revelation prints too, so wrap your minds round that. 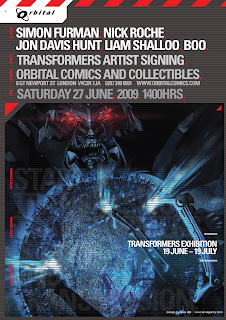 I thank that's it, really. The Commission situation has reached a bit of a freeze, but hasn't been forgotten, and I should be back on track with tackling them in july sometime. Thank you all SO much for your patience. It's genuinely appreciated.