BUY THIS ART PRINT AND BECOME A HERO: UPDATED

UPDATE 29 July 2013: Well, it's all over! With your help, we made 131 Digital Sales! That translates as €1310 for the Irish Cancer Society. (And we flogged the rest in private sales at fundraiser events, etc...) So, you did it, Rochearounds! You added €1500 to the current €8428.32 total on my brother Paulie's NYC Marathon Fundraising page. (http://www.mycharity.ie/event/paulie_roches_event/). And that's from prints alone; I know lots of you tossed him a few coppers (and then some) along the way too.

Thanks for your patience in me pimping this project across all social media strata, and in waiting for the merch to make it to your homes. (The last batch from this week will be dispatched before Auto-Assembly.) And the messages you sent us...man, why you make my face wet? It's been lovely to have so many stories shared, but heartbreaking that so many of them are similar to ours, and some far, far worse. So, you done a good thing. And with that, on behalf of a Ream of Roches, and Me Oul' Da, 'As The Fella Says', thank you.

UPDATE: Due to an absolutely unprecedented demand, we are considering upping the print run from 100 to 150. We're very, very close to selling out the initial 100 - hence this late night, panicked solution - BUT...I don't want to mess anyone around who thought they were getting a more limited edition than they now might be. If anyone has any real concerns about this, please contact me at nickrocheart AT gmail DOT com. Looking at the carefully considered messages and the speed in which this order was filled in under twelve hours, I can't imagine anyone would object to making €500 more for a cancer society, but you're the ones who've parted with their hard-earned cash, so let me know if this concerns you in any way. All prints will still be numbered - now out of 150 instead of 100 - and the Free Print offer still stands to new customers who pay for shipping. But do contact me if you have any concerns, or feel you've been misled in anyway.

And from all us Roches, for your support, encouragement and kind messages, thank you so much. 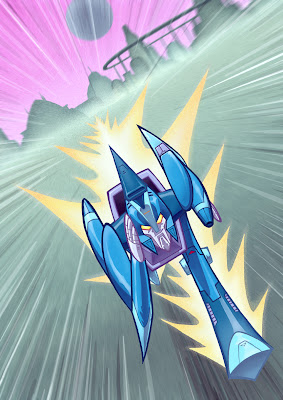 Would you like to own this limited edition Art Print, and do something good in the process? Then bear with me while I get a teeny bit personal.

Last year, I lost my Dad, Mick, to Cancer. He was the man who bought me my first Transformer (Hot Rod, natch), supported me as I  mooched around his house long past the time I should have moved out, and even during his stay in hospital last year, would flick through my newly-bought pile of comics, telling me that I was "Much better than these other lads". I never believed that, but it meant the world that he did.

Since the 'Oul Fella passed away though, my younger brother, Paulie, has taken up running. Like, out of nowhere. And in that short time he's gotten quite good at it. He made his goal this November's New York City Marathon, and ever since he secured his place, has been working tirelessly to come up with ways to raise sponsorship money for the Irish Cancer Society.

This is my way of helping him raise some sponsorship money, so I hope you'll play along at home.

*I've made a limited-to-100 copies run of this A3 (29.7cm x 42cm) full-colour 160gsm print, which I call 'FASTER'. The print will cost €10, of which every penny will go to the Irish Cancer Society, with additional costs covering postage and packaging. Each copy will come signed by myself, and individually numbered. You can purchase it by clicking through below, and the prices are based on the Irish Postal website's (www.anpost.ie) calculated rates. Please indicate if you want me to dedicate the signature to you, or leave a message of any kind.

*Amongst the options are 'Print For Collection'. So, for example, if you're attending Auto-Assembly, or any other convention of which I'm a guest, you can simply pay now, and I'll hand it over to you in person. Just indicate that this is what you wish to do in your Paypal transaction, or via nickrocheart AT gmail DOT com.

*All customers who order their print shipped will receive an additional FREE SIGNED ART PRINT of my choosing. I have lots of older art prints - some colour, some black and white - that I will chuck in for free as a thank you. Again, please indicate if you wish me to dedicate the signature, or leave a message to you.

*I'll be making one trip to the post office per week, so please be patient for delivery, though it should be no more than 20 days from your initial order.

*Please contact me at nickrocheart AT gmail DOT com with any enquiries, or if you wish to order more than one print.

So are you in? If so, we could potentially raise a €1000 for the Irish Cancer Society. That's kinda cool, right? I'll be pushing some of Paulie's other fundraising endeavours on Twitter. I can be found at @NickRoche and Paulie is @paulieroche. Also, if you don't fancy grabbing this limited art print, see if you can pop a few coins in the boy's hat over at his My Charity sponsorship page. It's http://www.mycharity.ie/event/paulie_roches_event/ If we manage to sell these 100 prints, you'll see Paulie's totaliser there jump by a grand, and it'll be down to you lot.

I wouldn't have de-cloaked and revealed so much personal stuff if it wasn't in support for The Child's running race, and in aid of a cause that, unfortunately, has affected everyone in the history of ever. Thank you all so, so much.
Posted by Nick at 3:32 PM

I'm sorry to hear about your dad's passing...

Ordered and paid for. Although Paypal didn't give me the chance to write in where I will collect the item.

I'm sorry to hear of your dad's passing. I lost my dear aunt to cancer two years ago.

Ordered and paid for. Wish your brother good luck!

Ordered and paid. Think you're doing an amazing thing here, a fantastic way not only to celebrate your Dad's life, but also to support your brother in his charitable efforts. Good on ya dude.

Ordered and paid for, fair play for helping both your brother and the Cancer Society!

Waiting on paypal to get my money order, hope the prints will last for a few more hours. ^^

Either way, good luck to both you and your brother!

Just wanted to check in and see if these have shipped. Can't wait to receive it!

Yep! All shipped now! Keep 'em peeled, but do let me know when you start to have concerns. Thanks so much again!

Ordered and paid for but forgot to say it was me oops. Still, the embarrassing email address should give it away.